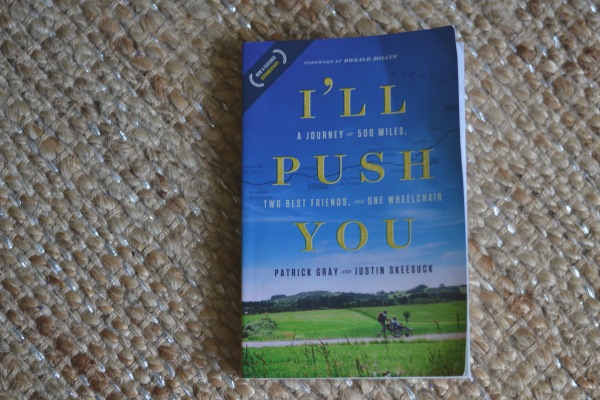 Hello long-lost blog!  It’s been a bit of a weird summer, and I’ll share more about it soon, but there’s been good reason why my blog has sat unattended for a couple of months.  I’m terribly far behind on book reviews, so I hope to catch up on those soon.

This book caught my eye as I’ve been wanting to read more fiction/stories over the summer.  I watched the trailer for the documentary that is coming out and found myself in tears.

I’ll Push You (affiliate link) is the true story of two friends, Patrick Gray and Justin Skeesuck, who grew up together and have stayed close through college and marriage and the early years of parenting.  Justin began to have nerve problems in his feet during high school, progressively losing mobility and control in his feet and legs.  For years doctors did tests and studies but were unable to give him a clear diagnosis.  The autoimmune neuromuscular disease acted much like ALS but wasn’t ALS.  As his disease progressed, Justin began to have less and less mobility and the Gray family decided to move closer to the Skeesucks to help and do life more together.  Patrick and Justin had enjoyed many adventures together over their years of friendship, so it was’t much of a surprise when Justin approached Patrick and told him he really wished he could do the Camino de Santiago in Spain.  The Camino de Santiago is a 500-mile trek through the mountains and rough terrain of Spain, usually done as a spiritual pilgrimage.  As soon as Justin mentioned the idea to Patrick, Patrick’s response was, “I’ll push you.”

The book chronicles their adventure, how the pieces came together, how their journey went, and all the amazing things they learned and grew in as they went.  They also share much of their story, the history of their friendship, and their faith in God in the book.  I thoroughly enjoyed it, and was maybe most impacted by the intensity, depth, and sweetness of their friendship.  Their friendship is something special and rare, and it makes me wonder if I would love my friends so sacrificially.  It makes me want to be a better friend!  I was also struck and blessed by Justin’s attitude toward his weakness and dependency.  He is peaceful and surrendered, even as his body slowly succumbs to his disease, and in my own season of weakness and dependency, it has been challenging and helpful to see his example.  I’m eager to see the documentary when it releases!

I highly recommend this sweet story.

Thanks to Tyndale Publishers for their complimentary copy of this book in exchange for my honest review.  All opinions expressed are my own.

Making good headway on my sock for the #keepitsimplekal hosted by @shopknittingnellie and lately I've been reading The Hiding Place. I think I read it back in highschool but if so it's been long enough that it hits fresh. I find it immensely helpful and encouraging to read the stories of other saints who have persevered and gone through challenges far greater than my own. I had been grumbling about some things in my heart as I was going to bed last night and reading Corrie's account of her initial arrest while being terribly sick with the flu, how she slept on a rancid straw mat on the floor so weak she couldn't get the food when they would bring it to her cell, with a fever raging for weeks while.in solitary confinement. Can you even imagine? The mental anguish on top of the physical, being in it so alone. I found myself so humbled and grateful for my soft bed, my wonderful covers, my husband lying there next to me reading aloud the scriptures as he always does before we go to sleep. We are so helped to get outside of our troubles and outside of ourselves by reading the amazing accounts of others, how God met them and their faith survived their suffering. How God didn't necessarily rescue them from their trial, but He was sufficient for them in it and provided in the uncanny and mysterious ways only He can. I would also recommend the book Trial and Triumph which was a book I read aloud to the kids last year, martyr stories through all of history, and it profoundly affected us all.
Follow everything He gives on WordPress.com
Loading Comments...
%d bloggers like this: