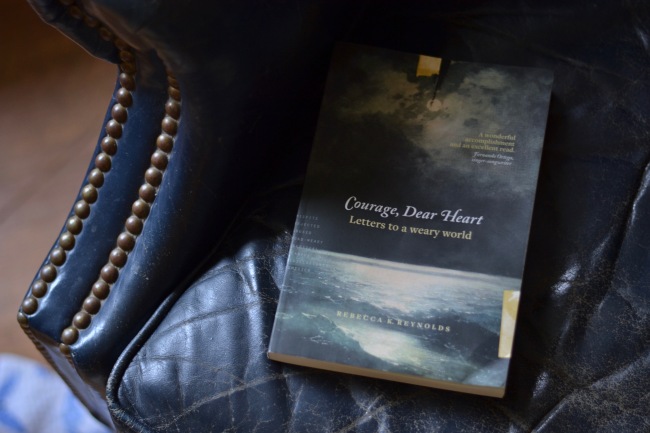 Hey friends.  I finished this book, Courage, Dear Heart: Letters to a Weary World, not too long ago and wanted to share about it with you here!  Written as letters to the brokenhearted and storm-battered, in each chapter Reynolds strives to offer three things: words for our pain, the presence of a friend/companion in the journey, and hope so that we can run the race.

You cannot be human for very long and not feel some heart ache, some brokenness.  As you live and walk farther, you only gather more hardships along the way–no one gets through life unscathed.  Of course, life is not only about the hardships and there are rivers of joy.  However there are seasons where the grief and pain seem to swallow up all of the light and we aren’t sure that we’ll ever recover.

In my own life there have been a handful of excruciating seasons, most I can’t really share in this space.  One such season for me was in the first couple of years immediately following Phoebe’s diagnosis with Celiac disease.  Of course the shock of the diagnosis and its implications for lifestyle changes was one overwhelming aspect.  There was so much change so quickly, so much to learn about, such a huge leap in our grocery budget, medical bills from multiple procedures, etc.

Even now as I sit to write this, I am overwhelmed trying to explain the depths of what this journey has been like for us.  I’ve tried writing this post out a few times and keep coming up short.  There is so much, so many layers.  Emotional pain, physical pain, spiritual ramifications, financial strain–the way all of that hits a marriage, the way my husband and I process it all differently and then have to work through it somehow together.  The way it makes a mother nearly go crazy to watch her child suffer and to feel helpless.  Then there is the PTSD of sorts of having gone through something like this, and the temptation to live now in the shadow of the next shoe dropping.  It has been one of the hardest seasons to date, one I’m not sure I’m totally through yet and certainly not one I can fully unpack or process yet.  I was sharing about it with a close friend + confidant recently, how going through this has somehow fundamentally changed the landscape of my soul.

All of that to say, Reynolds book strikes a chord with the storm-battered and weary.  So many words have sounded empty and hollow and lifeless in this season.  Few seem to speak the language of the suffering.  Maybe only those who have walked through these kinds of dark valleys can speak the tongue of it, sending forth words to pull another groping traveler along.  Her words are honest, simple yet profound, hopeful.  It’s rare that a book will make me cry, but there have been time that her words have reached that inaccessible closed off part of my heart and helped to crack it open a bit so the pain can be released.  That is a gift, friends.

She offers permission to suffer, to be human–which we so desperately need when in the company of fellow Christians who often unknowingly communicate that we must be strong in our trial.  She offers a realistic view of what it looks like to be human and yet carry the indwelling presence of the Holy Spirit.  (What a mystery!)

I highly recommend it for those of you who might be in a trying time for one reason or another, needing letters from a fellow sojourner who can offer real hope and care and help you grope for God through the dark.  I leave you with this little excerpt from the introduction:

“In C. S. Lewis’s The Voyage of the Dawn Treader, young Lucy finds herself trapped inside a thick, enchanted darkness in which all nightmares come true.  Overwhelmed by fear, she cries out to the great lion, ‘Aslan, Aslan, if ever you loved us at all, send us help now.’

At this moment of desperation, Lucy notices a light.  She looks along its beam and sees something inside:

‘At first it looked like a cross, then it looked like an airplane, then it looked like a kite, and at last with a whirring of wings it was right overhead and was an albatross.  It circled three times round the mast and then perched for an instant on the crest of the gilded dragon at the prow.  It called out in a strong sweet voice what seemed to be words though no one understood them.  After that it spread its wings, rose, and began to fly slowly ahead, bearing a little to starboard. . . .No one except Lucy knew that as it circled the mast it had whispered to her, “Courage, dear heart,” and the voice, she felt sure, was Aslan’s, and with the voice a delicious smell breathed in her face.’

So courage, dear heart.  I know you are tired.  I know the darkness is thick, and the way is longer and harder than you ever expected it to be.  But God sees you, he hurts with you, and he welcomes your honesty.  Even to the ends of the earth, he will lead you on.”

A special thank you to Tyndale Publishers for their complimentary copy of this book in exchange for my honest review.  All opinions my own.