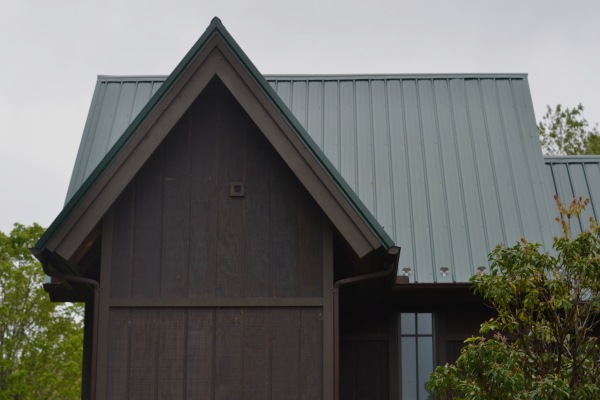 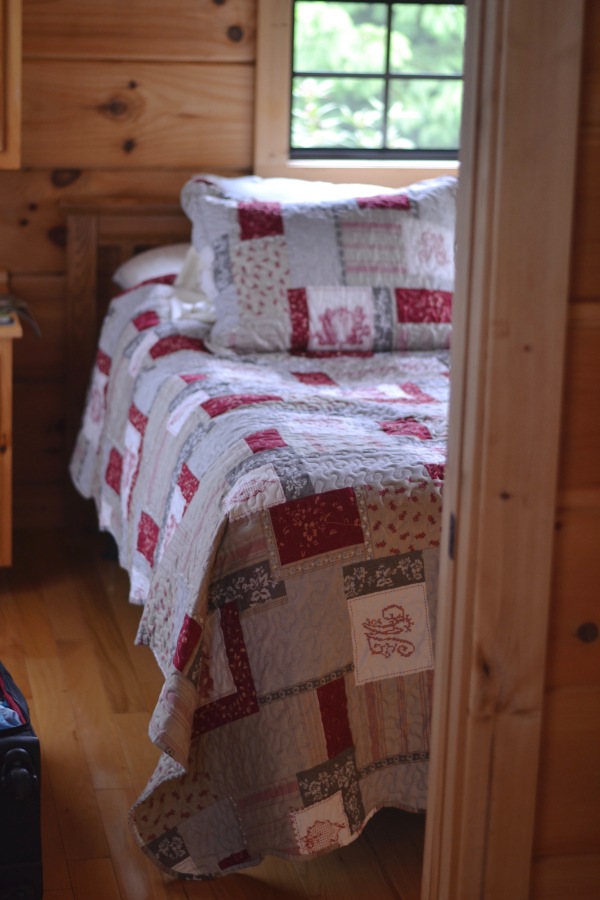 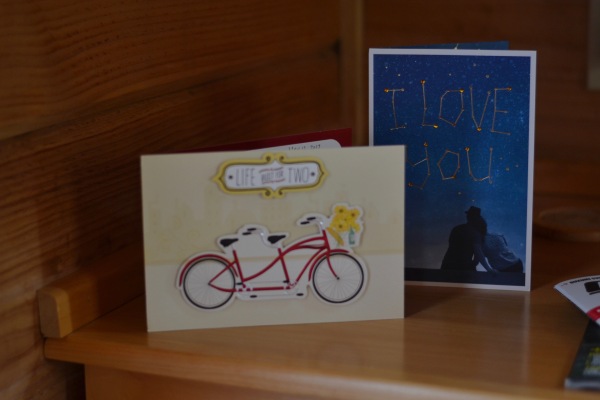 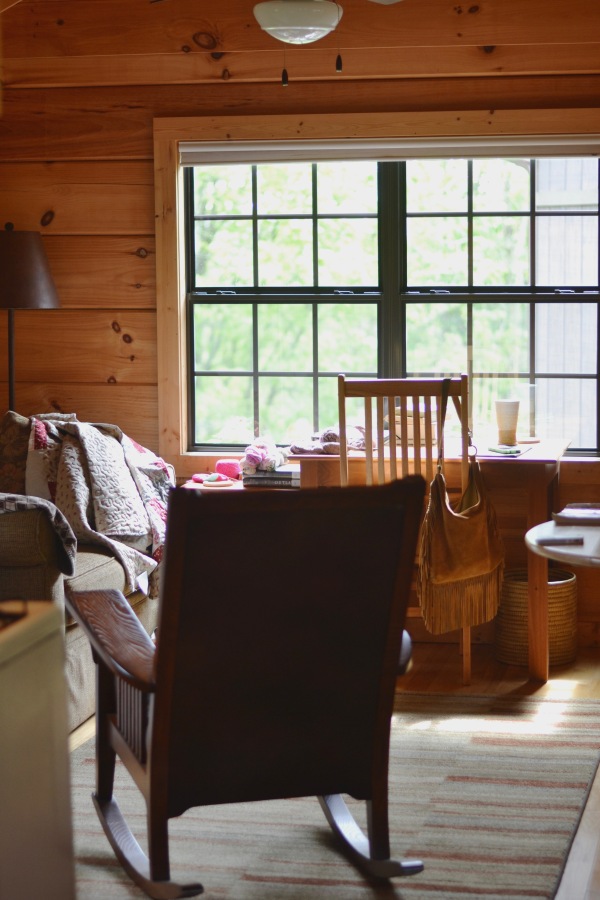 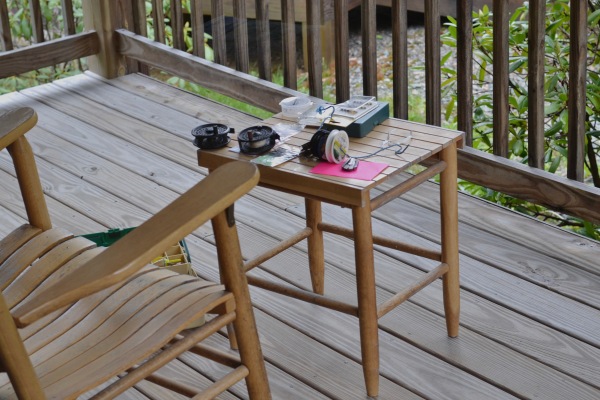 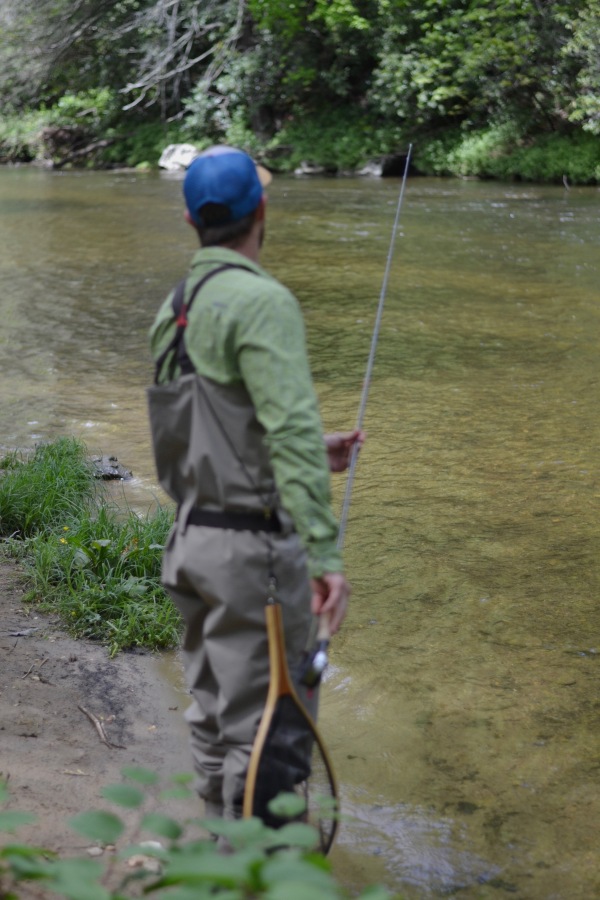 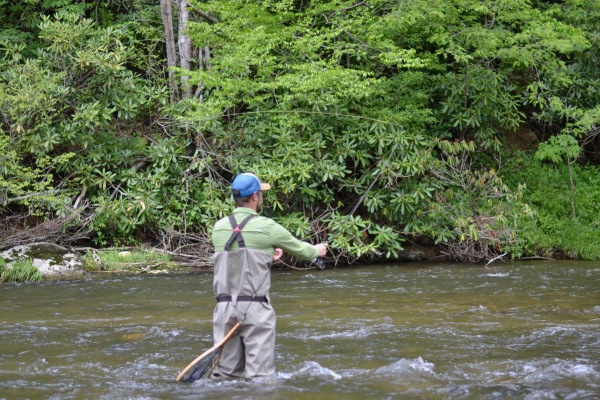 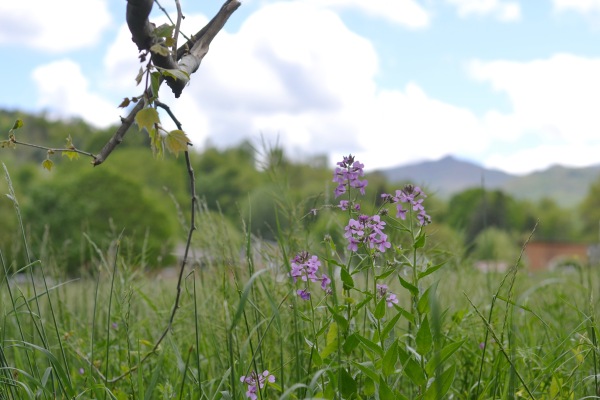 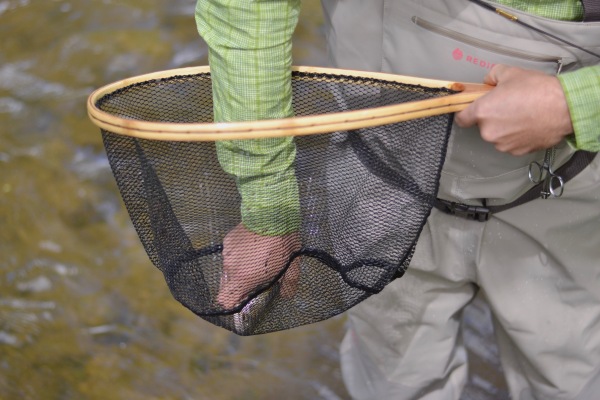 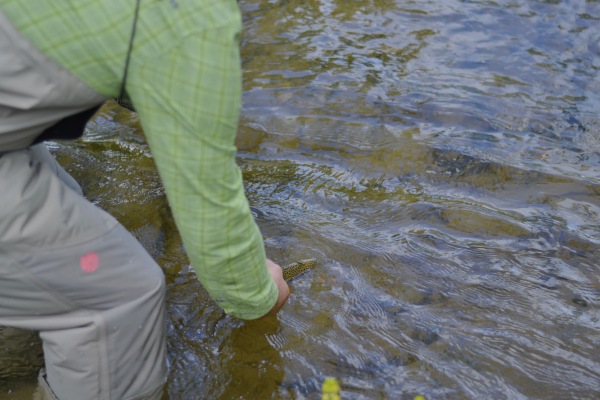 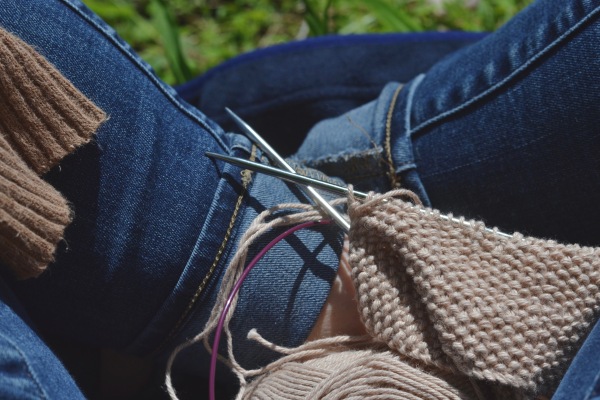 Brandon and I slipped away for our anniversary weekend (May 12th) to celebrate 11 years.  Friday began with his parents arriving to our home (so thankful to them for their willingness to drive to us and watch the kiddos for the weekend!) and us transferring all the needed info to them, and then we left just before noon.  We decided to stop for lunch in Black Mountain on our way to our cabin in Banner Elk, NC.  We shared a pizza (with gluten in it!  So strange!) which immediately made Brandon’s day.  I had asked if we could stop at my favorite yarn store while there because I had a gift card to spend there.  We went in and Brandon surprised me: he had called ahead and had a gift waiting for me there, and also told me I could buy some yarn.  A “reasonable amount” of yarn, he said.  EEE!  So I bought a couple skeins of speckly hand-dyed yarn, which I’ve been dying to try for awhile now, and I’m planning on knitting a shawl with it.  Brandon also picked out a skein of brilliant blue/purple Wollmeise yarn for a hat for himself.  I am super stoked to try the yarn he picked!  It feels heavenly.  It’s really neat to see him take an interest in yarn with me, even though he’ll probably never knit.  He appreciates the artistry of it, I think, and he had fun picking out something for me to make for him.

From there we drove further up into the mountains, not wanting to arrive at our cabin too late.  I had been to this cabin before on a little solo retreat last fall, but I wanted to share it with B, knowing how much he would enjoy it.  We made a stop to the grocery store before heading up to the cabin.  We brought most of our own food, simple meals without much fuss or prep needed.  It was strange to not have to think about things being “gluten-free” or worry about cross-contamination in a different kitchen.  Our lives have changed so much with Phoebe’s diagnosis almost two years ago.  We have grown accustomed to it and we don’t mind the change at all, but we forget how much easier it is to shop/eat without concern about gluten.  It was a nice mental break for both of us.

There are some really beautiful spots in these North Carolina mountains.  We have seen magnificent mountains when we lived in Colorado so we sometimes dismiss these quiet hills, and then the beauty surprises.  Our little cabin was nestled with a couple of other cabins at the top of a mountain, a quiet haven with the scripture from Matthew 11:28 posted:

“Come to me, all who labor and are heavy laden, and I will give you rest.”

The rain was beginning to fall heavily, we got into our cabin and Brandon unloaded the car.  The cabin smells just like my aunt and uncle’s cottage in  Muskoka, Ontario–a wooden cozy cabin smell.  We lit the candles that were waiting, cracked the windows to hear the rain, turned on the little gas heater, unpacked our few things.  The rain grew into a thunderstorm, and we just sat in the stillness, knitting, reading.

I’m not quite sure why we had the best time, but we did.  Maybe it was just a sweet gift from the Lord, knowing we need refreshing.  Maybe its because we both built some surprises for each other into our weekend.  Maybe it was all the quiet.  B and I both are introverts and I didn’t realize how much we both crave some uninterrupted quiet.  Space to think.  I used to be afraid of being an old couple with nothing more to say to each other, but this anniversary showed me there is a place of comfortable silence.  A silence not because you are weary of each other, but because you rest in other’s presence without always needing to fill it with conversation.  There is a security there.  We know each other.  We love each other.  There is less striving than there used to be.

We also talked a lot about our marriage, where we are now.  We tried to remember every anniversary and which ones were our favorites, which ones were disappointments.  We reminisced about last year and how much we enjoyed our anniversary backpacking trip, but how exhausting it was.  He gave me a card with constellations on it and I laughed because I almost bought the same one for him.  It was our “thing” when we fell in love while working for a backpacking organization.  While we were apart often leading various trips, we would look up at the big dipper at night and know that both of us were looking up at the same cluster of stars in the same sky, and it sort of became “our” constellation.

Our lives have become so much about our children, as they must, but we needed to have some extended time just the two of us to remember each other.  To re-member, as Ann Voskamp would say.  Our remembering our love for each other, our commitment to each other before and beyond having children together–it re-members us, puts us back again, all the broken bits held together again.  We needed to remember that when all else fades into the background and its just the two of us, we still really like each other.

I’m not sure why, but I think we also recovered some kindness.  In all the mounting stress of these little years, the sleepless nights, the endless giving and dealing with interruptions, the financial strain of living on one income, the care-taking of a child whose health goes up and down–we have grown careless with each other.  We have lost some of our common courtesy, some of our simple gentle handling even in the way we talk to each other in response to hurts and offenses.

Have you heard Sara Groves album Fireflies and Songs?  I feel like the whole thing is about marriage in one way or another.  I think of her lyric “Run for your lives, all tenderness is gone in the blink of an eye.”  Isn’t it shocking in marriage how this happens, how the rub of life and the comfortableness with each other can creep in and cause us to loose our tenderness toward one another, the common kindness that we extend to strangers but now can’t muster up for the one we love the most?  We have grown careless with each other, and yet something jarred us awake to the reality that simple kindness and gentleness with one another is worth fighting for.  Better to have it than to fight to be right.

In the morning, we slept in as late as we could.  We enjoyed steaming mugs in a drizzly rain.  We lingered long over books and bibles.  He geared up to go fly fishing–the first time for him in many months.  We spent most of the day on the river nearby, eating a picnic lunch there and staying until we needed to head back to the cabin to make dinner.  The next morning before we drove back home, we went to a different spot on the river and he fished again while I knitted.  It was mother’s day and it felt odd not to be home with my babies, but we enjoyed every minute away together without a hint of guilt.

I remember hearing someone share that the secret to their lasting marriage was falling in love over and over again, and I didn’t quite understand it at the time, but I think I do now.  I think it was the first time in our 11 years together that I felt like I was falling in love again, seeing Brandon with renewed eyes.  Yet it’s not the superficial, young and untried love of a newlywed.  It is love reignited, love that has withstood some hard tests and storms and still remains, steady and strong.

It wasn’t a fancy trip, we didn’t travel far.  We didn’t spend much and we didn’t do much. But somehow in the mystery of the simplicity, God blessed us with renewed love for one another.  With hope for a bright future.  With the comfort of His presence and the comfort of each other, all we have walked together.  All the intimacy between us, the secrets only we know: the darkest valleys, the sweetest victories.  All these miles traveled together, whether good or bad.  Hand in hand, with eyes fixed on our Prize, helping each other make it to the end, saying to one another as we go: I still see you.  I still love you.

Really we don’t need much
Just strength to believe
There’s honey in the rock,
There’s more than we see
In these patches of joy
These stretches of sorrow
There’s enough for today
There will be enough tomorrow.
Sara Groves, Enough